On the way home from the Coffs Harbour Butterfly House on Sunday on one of the back roads we were amazed to see 4 large Wedgetail Eagles – Aquila audax. They were down on and beside the road – of course we had to pull over (again the husband mumbling about obsessive tendencies!). To see 4 wedgetail eagles all together was just too amazing to pass by. I was also concerned about whether they were all down as one might have been hit by a car. 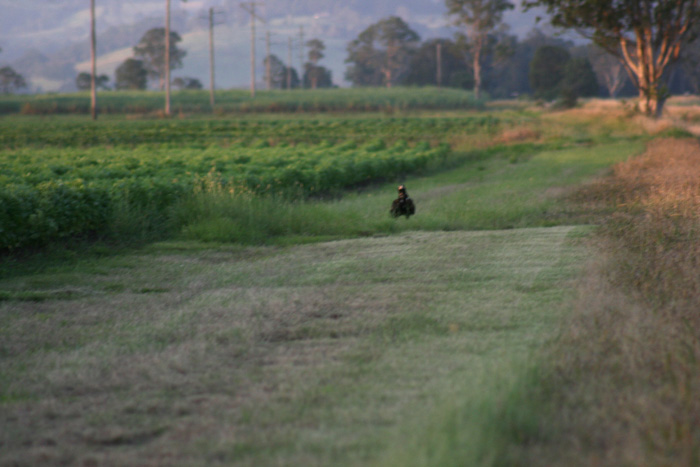 Fortunately (although the fox who was the roadkill probably didn’t think so!) they were all fine – but were screeching and not impressed that this car with that annoying person with camera were interrupting their feeding. I am guessing that perhaps they were 2 parent birds with their young – although they were quite well grown. I do not know much about wedgetail eagle behaviour – I am aware of a pair of birds who I frequently see in the 2 valleys surrounding this area but I have only ever seen 2 together in this territory. There is also a pair of wegetail eagles in the valley on the road to Kyogle.

These four birds on Sunday were very much a group and flew to a nearby tree together where they carried on with their screeching and then took off again.

I managed to get some photos but it was right on dusk – about 7pm which made it more difficult. I have a long lens but not one of those wonderful super dooper ones – maybe one day. So the photos are a bit grainy but a wonderful sight!