After a couple of difficult weeks again with my shoulder overuse injury I was back at the Physio in Ballina. I will need surgery on the shoulder within the next few weeks – something I am not looking forward to. I am however looking forward to the likelihood that it will greatly improve my pain levels and allow me to work more consistently on my lino carving! Thinking positively! Recovery will be a slower process and will mean that I will have to concentrate on artwork other than lino carving for a while. So that means more drawing (that I love doing) and I would like to get back to doing some photography work especially upgrading skills  within the digital photography realm. Another printmaking field I’d like to explore is solar plate etching & am hoping to find some short courses to do.

Anyway after the physio I couldn’t resist a lovely walk on the beach. It has been very very wet here over the past few weeks and it was great to have a day with less rain & a window of opportunity to go for a walk on the beach! I didn’t have my SLR camera with me but did have my iPhone. The surf has been pretty wild and as a result the beach foam was pretty spectacular. 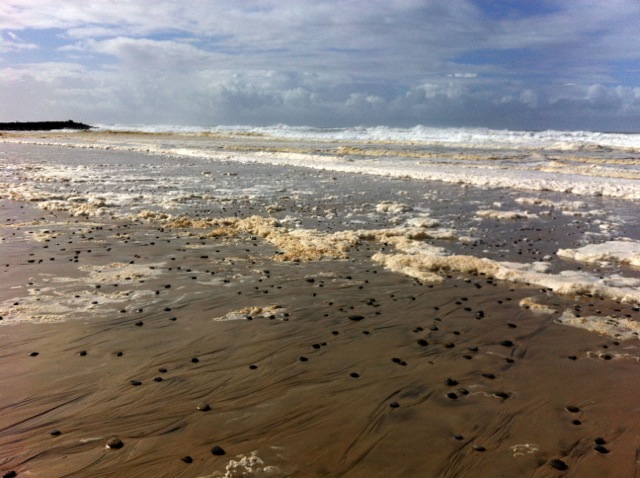 When I was young and right up until I was married, all the holidays that my Dad took found us as a family headed all the way from Sydney to Yamba where my Grandparents lived. My Dad grew up outside Grafton and then Yamba and he couldn’t wait to get back there to go fishing in his beloved Clarence River. In retirement he found a lovely spot with his own wharf to fish off just outside Grafton.  He had moved to Sydney in the 1950’s to find work and later my Mum joined him. It was such a long drive taking about 12 hours driving on the winding and dangerous Princes Highway way back then from Loftus to Yamba. Not a good process for someone like me with motion sickness making the trip fairly tortuous. I used to have to take those awful motion sickness tablets – not sure what was worse the car sickness or the taste of those tablets! Nothing really worked & invariably there was at least one stop whilst I was sick.

The trip I must say has definitely improved. It is about 8 hours now with mostly double lane divided roads and nearly all of those old dangerous roads like around Bulahdelah are now gone thank goodness!

In 1974 there was a major flood from Cyclone Zoe and the one road out of Yamba was cut off. This was most fortunate for me, as someone who was not exactly fond of school this ‘natural disaster’ came at the end of our holiday time and meant we ended up missing a few extra days of school! As a teenager I remember being most excited as this was the first flood I had actually experienced. Living on the North Coast in the last few years in particular, floods have been a common occurrence, from small to moderate and the impact can be from nuisance to devastating.

These photos are from an extreme weather incident that hit the Yamba/North Coast NSW around from memory 1979/80. I was a keen black and white photographer processing and printing all my own photos from Year 10 at High School and these negatives were from this time. I saved up a couple of years later and bought the best enlarger and lens I could afford and spent endless hours in the ‘darkroom’ which essentially was our bathroom with black plastic blocking out light from the window and the door. The processing trays of chemicals were set up over the bath! These photos are some I took of the beach foam at that time. They show Main Beach Yamba and as you can see the foam levels were absolutely huge! It must have been about 10 feet deep! I scanned the B&W negatives and photoshopped them – my film processing skills and photography skills back then were pretty basic so the negatives are a bit limited but they do show an incredible sight. I remember thinking at the time it looked like thick snowfall, beautiful as is was still white but dangerous as well. It would be very easy to have got lost in amongst all that foam, thank goodness everyone had the good sense to watch from afar! 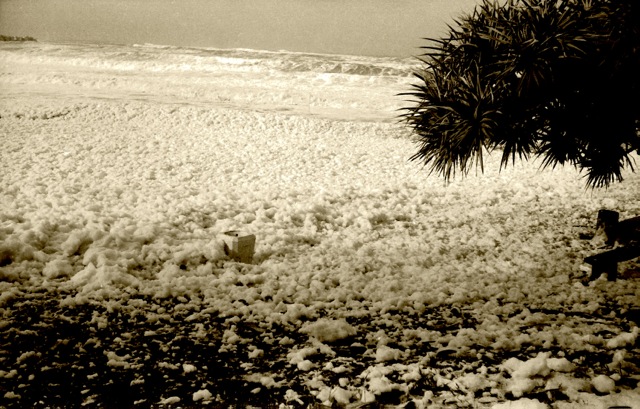 The surf foam and the distinctive North Coast Pandanas.

This shows the foam reaching right up to the Surf House.

This is looking across the beach towards the light house and entrance to the Clarence River. Iluka is on the opposite side of the river entrance and can be seen faintly in the distance. 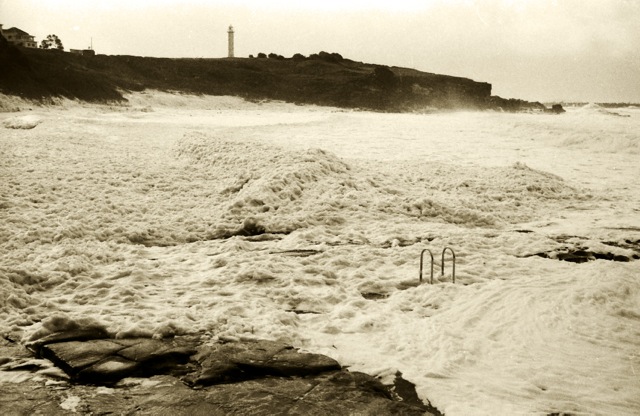 The handrails that lead into the sea swimming pool that is alongside Main Beach shows the height of the foam that was rolling into shore in deep waves.

This photo below is an old slide my Dad took in about the 1960’s I think – it shows Main Beach at low tide looking from the opposite side where the lighthouse is and gives a sense of the amount of foam that was on the beach.