Here a few quick tips on getting your linocut block prepared ready for printing. 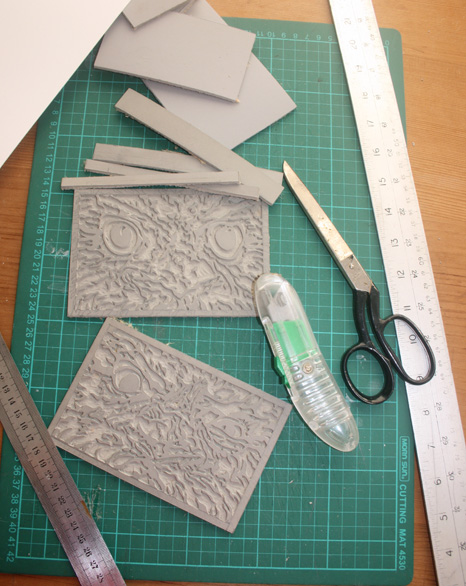 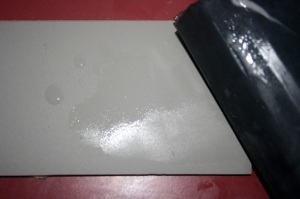 * I trim the edges of the block to make a clean line for the print using a steel ruler and a sharp bladed knife. Traditional linocut blocks have a hessian backing.

* When you trim a linocut block this hessian backing needs to be further trimmed back to ensure none of the hessian stringing is left – this string can easily pick up ink when you are printing and create unsightly marks onto the surface of the print.

* I use scissors to trim – first from the front and then I turn the block over and check of there are any pieces of string that may slowly come undone whilst printing and I trim these back as well. I regularly check the block whilst printing to ensure no stray fine hairs are still there and picking up ink. It is easy to miss one and it is not until it marks the print that you realise it is there. 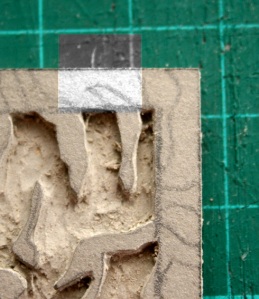 Within the black and white section of the above image on the left you can see a fine white line – this is one of the small and often extremely fine hairs that can easily ruin a great print – just ask me I know!! The image on the right shows the fine marks that can occur from these hairs picking up the ink. I have discarded many prints (which is quite costly) because of this. I try to keep a particular standard to the prints I include within an edition and work at improving my skills on an ongoing basis. I am finding that as my actual printing technique and knowledge of printmaking improves so the standards I want within each print of an edition, also increases. I am always seeking to learn new and improved techniques and tips through a variety of sources. I am very aware that over time my printmaking skills have improved and as a result so have the prints! I hope this information helps other linocut printmakers in identifying this and other  common printing mistakes.

As you can all guess I finally got to print my Tawny Expressions blocks tonight – after spending time in Sydney, being unwell and the awful wet weather (that I tend to try to not print in – now that’s another issue of damp, limp paper in wet and humid weather) I have managed to do some printing this afternoon – fine sunny and actually quite warm for this time of year. Speaking of weather tonights printing listening music – Crowded House!

One thought on “Preparing a Linocut Block for printing”