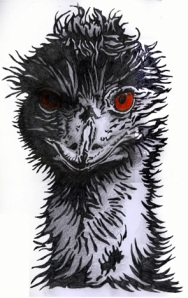 As I noted in the original posting of this drawing “it is not quite right!” I can see that it isn’t and posted it anyway to highlight that things go wrong. The secret is to be able to see the mistakes and then either fix them – or as in the case of this drawing which was beyond ‘going back’ noting what was wrong and possibilities in ‘fixing’ it. You can be sure that the next time I draw an emu I will take the ‘wrongness’ on board and seek to remedy it.

However, the wonky ‘wrongness’ goes with my image of these quite odd and unusual birds! This could be exploited to emphasise the ‘personality’ of the bird – especially from an illustration perspective. That being said, the purpose of the image and what an artist was trying to achieve is important – if you want to have a scientific illustration of an emu’s head this drawing simply would not do! My aim was simply to draw an emu’s head and play around with a few ideas – there are aspects to this drawing I like but I also do like to ‘get it right’ in relation to things like his beak!

This is such an important thing for art students to understand – many students give up with the cry “I can’t draw” because they instantly want to be able to create realistic lifelike drawings around the 10 – 15 years age group without any practice. They will often carry this notion throughout their lives. When this just doesn’t happen then the “I can’t draw” and the giving up happens. I always say if you can put a mark on a page you’re drawing! You may not be a Picasso but drawing is a skill that you can learn if you choose to pursue you can improve and sometimes may surprise yourself by actually succeeding.

Drawing is a process of visual memory – the more you draw a particular subject and commit it to your visual memory the easier it becomes to draw each time you approach the same or similar subjects.

I make the analogy with learning the scales on the piano – they can be boring, definitely repetitive but absolutely necessary – understanding scales and keys in music is a core skill in playing any instrument. Repeat drawing a subject matter gives you an increasing knowledge and ease with the subject matter.

I believe repeat drawing a subject matter and the ability to draw is a core art making skill. That is not to say that those who have not pursued this skill are not able to still produce wonderful work but having a strong base of drawing or draughtsmanship generally gives you a greater toolbox to draw upon in developing arts practice. It is also a lifetime skill that I don’t think ever ends – improving ones ability to represent a 3D subject in a 2D form and then being able to extend beyond the representational into abstraction or design work is intriguing and endlessly challenging!

Work in Progress … carving the linocut Bookplate Design Commission 3 🤗
"hark, now hear the sailors cry,
Ah Aunty Lorna … always remembered & never forgotten 💙 Ten years ago 7 Sep 2011, you said no one would remember you but you are always in our hearts my dear ❤️
Happy Father’s Day to my lovely Dad. Thankfully they are living with us at the moment so we can have a lovely lunch a little later of his favourite fresh fish & chips 🤗
Progressing … flannel flower bookplate design linocut 🤗
Native Daphne - Sweet Pittosporum - Pittosporum undulatum starting to flower in the rainforest 🤗
Gorgeous Grevillea ‘Hills Jubilee’ is doing rather well in Northern NSW @canberranativenursery 🤗
Creek in out little rainforest 🦚🌳🦚 Sound on for creek & birdsong 🤗
Gorgeous foggy peaceful morning today 🤗
Morning garden views 🤗
Afternoon rainforest bird life 🌳🪶🦚
YAY Second dose Pfizer today!!