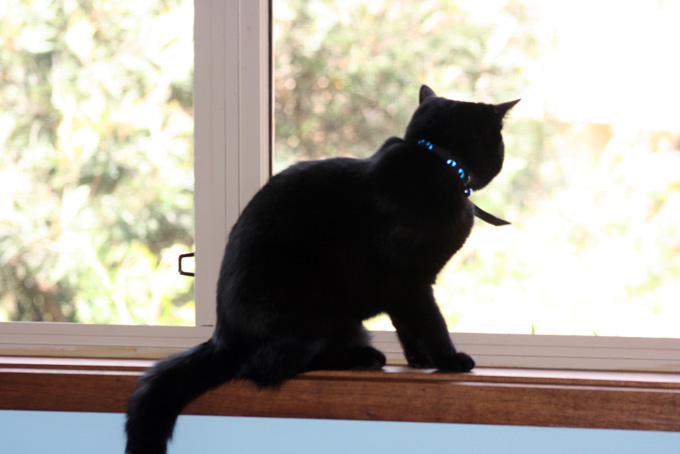 My middle son wanted a cat – for a long time we resisted as I was concerned for the native birds/animals. But somehow we got talked around – as long as it was an indoor cat with a bell. She is quite a  little ‘miss’, likes things her own way and ‘tells’ you so with a rather loud persistent meow.

One of the things she enjoys is prowling from one window to the next right around the house. She watches all the ‘moving’ things outside – at the moment in particular the noisy miners keep her quite entertained.

Now I’m sure she would attempt to catch them if allowed out because ‘they move and jump and seem like such a good thing to chase’ –  but I am equally sure they’d give her a decent run for her money!! There is another local cat that seems to be a recent addition to the local area – a grey tabby. I know exactly where it is of a day – not because it wears a bell that I can hear but also because the noisy miners have taken a severe dislike to it and are acting as vigilante dive bombers wherever they can get a clear shot. Now these birds can be quite vicious and nasty and have been known to injure and kill other birds – they may be smaller but the noisy miners have quite the attitude and tend to ‘hunt’ in packs!! When they can’t get a clear shot of this cat they sit up above the area the cat is in and squawk incessantly giving it their collective ‘piece of mind’. Now our cat ‘Ren’ should actually be grateful for the defence of glass and screen! Today we found the grey tabby cowering under our front deck and had to forcibly evict it. I admit I do in this case tend to agree with the noisy mynas as I really prefer my native birds and wildlife be left in peace!

Ahh I missed the Birdwing Butterfly today near our vines! But my son managed to get a few iPhone photos through the window. Through the flyscreen but still good to document when they were here 🤗
Finally my website is back up & running! Moved to a local Australian webhost @newsprout Great to support local businesses & terrific to have my website back! Link in bio
A few people have asked how do they check to see if someone is using their name & images?
Hello @instagram & @instagramforbusiness please check your DM’s ... sent a few 🤷‍♀️😳
Hey @instagramforbusiness what is the point in having an Instagram Business account when you do not respond at all when fake accounts are created & you can get absolutely no response except an automated one ignoring that these accounts are both using my images illegally & clearly impersonating me by using my name!! You need to do better if you want to keep business on your platform!
Hey @instagram it is clear that these accounts are using my name & my artwork in their profile pics. Clearly they are impersonating me ... please remove these accounts!
There is a list of fake accounts clearly pretending to be me. Same name & using my images. @instagram has sent an automated response saying they will not take the accounts down as they do not contravene community standards. Clearly fake accounts pretending to be someone they are not SHOULD contravene community standards 🤷‍♀️🙄
Thanks Jessie & Charlie @seatemplelandscaping terrific job on the new custom built veggie gardens 👍 They fit perfectly & Jessie helped to fill them ready for autumn veggie planting 🤗🤗🤗
Weather 🤗
Rainforest floor ... Small Leaved Tamarind - Diploglottis bracteata - fallen fruit in little layers 🤗
Ooh what’s that up in the tree in the rainforest today 🤔
Stunning Ivory Curl flower in my garden 💚🤗 This tree in our garden is about 25 years old & is just beautiful. It was pruned once by a very good arborist due to some storm damage. He kept its natural shape & it has never looked back always just flowering like this twice a year 🤩